I’ve had a good variety of opportunities to shoot action photos over the last year, so here are a few of my favourite photos (in no particular order) and a little about the stories behind them. 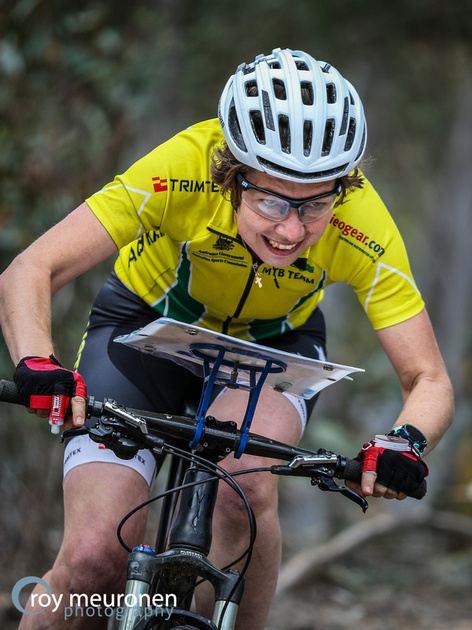 Over the years I have competed in foot and MTB orienteering events, but the continuing connection I have with the sport is my dad – Eino. He was dragged along as I first picked up the sport as a teenager, and hasn’t stopped since – he’s still going 40 years later. Now, he keeps pretty active for an 84yo, but my sisters and I were a little worried when he declared that he was going to compete in the ACT MTB Orienteering Championships again. With a patchy history of MTB “offs”, I decided it might be best to tag along and keep an eye on him. Long story short – Dad managed to finish both days, and it was a great opportunity to take the camera out to capture some action.

I like this photo of ACT rider Marina Iskhakova as she is nicely isolated from a clean background by the shallow depth-of-field; the angle of her bike shows some action; and the reflection off the map-board provides a nice fill light to show her face. I’m pretty sure she is enjoying herself, but he expression of determination on her face is telling. 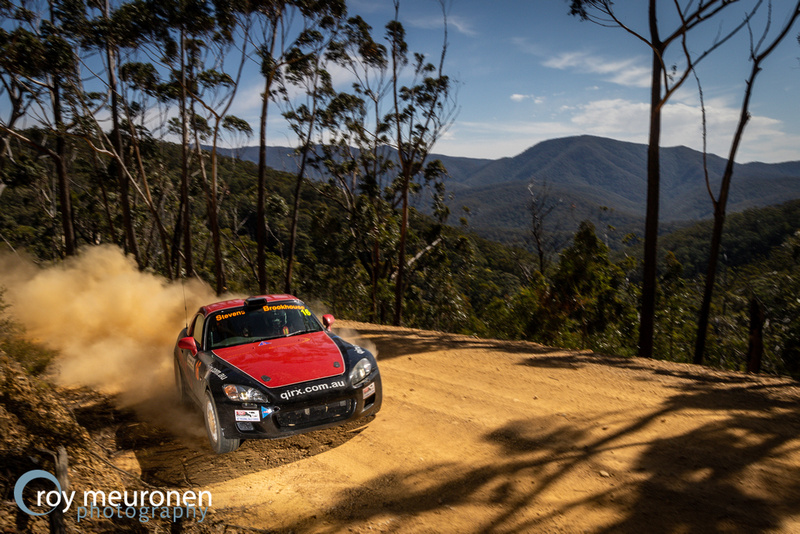 This event is based around Shallow Crossing on the Clyde River near Bateman’s Bay. Normally I would do this event as a day-trip as it is only a couple of hours drive from home. On this occasion, as there was free accommodation on offer at the camp ground, I took the opportunity to head down the day before to do some reconnaissance. I have done this a couple of times in 2018, and it has paid off for a couple of reasons. First, it’s great fun to drive the rally stages, and secondly, it takes the guesswork out of choosing shooting locations.

The Mini’dulla rally takes a circular route around the ranges west of the Clyde river. The obvious shooting locations were on the first stage, where there was plenty of access from the King’s Highway. Some of these spots were okay, but when I drove towards the end of the second stage, the views opened up, so I stopped to check it out. There was a small spot I could stand safely, and it was (only) about 1km walk in from the end of the stage. Thanks to the event organisers, I was able to follow the control officials in to the finish control location during set-up, then wander down to the spot.

As it turned out, the south coast was blowing a gale on that day, and the exposed position on the top of the ridge made it a little uncomfortable trying to stay upright on a narrow ledge on the bank inside the corner. Even worse, when the wind was blowing, I could not hear the cars approaching the corner. On most occasions, the first I heard the car was when it first appeared around the corner.  So I spent most of the morning, with the camera poised in a ready position hoping to be fast enough to catch the cars for the shot.

To add an additional degree of difficulty, I set up my flash (remotely fired) on the ground on the inside of the corner. With the strong sun coming in from the right of frame, it helped to fill the shadows on the inside of the cars. Down-side of this is that you only get one shot with the flash, so timing was important. There were also a couple of crews that used a very tight line that had me very worried about the welfare of my gear.

I like this shot of Denis Stevens and Frank Brookhouse in their Honda S2000 as it highlights some of the stunning landscape that the competitors probably don’t even notice as they race through the stages. 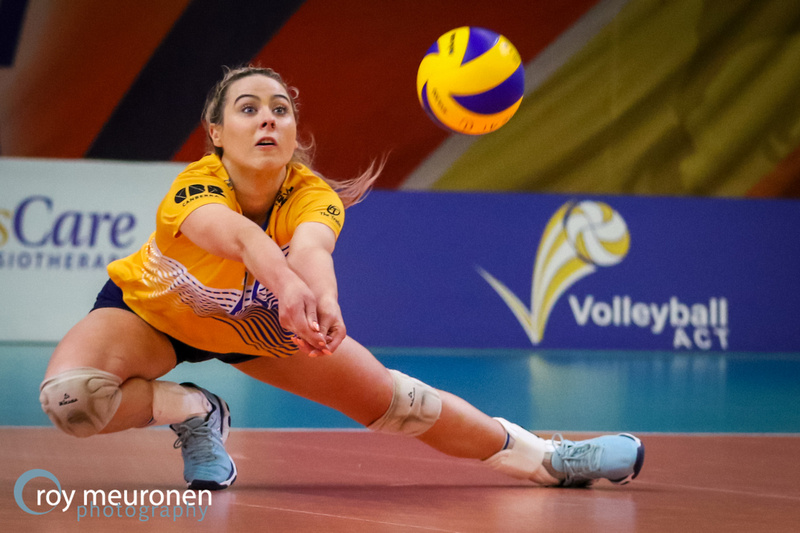 I have been playing Volleyball for a long time – let’s leave it at that.  I’m still actively competing with a few other guys my age in a local comp against a few people probably a third our age. Why do I still play? Well, my knees have managed to hold out (so far), and I love to play. So naturally, it makes sense to combine two of my loves and shoot volleyball. I’ve been shooting the home games of the Canberra Heat AVL teams for a couple of years now. It’s a fast moving sport, and a lot is going on, so I think it really helps to have over three decades playing experience to help know where to point the camera.

This photo of Holly Mallet receiving serve stands out to me for a few reasons. The active body position, the ball location, and the eyes tell a great story of what is happening. The background is pretty clean, and there are no arms or legs of other players getting in the way. The juxtaposition with the VACT logo in the background is also a bonus. This was shot sitting on the floor a few metres behind the referee stand. Standard action sport settings – 1/1000th second at F/2.8 with a high ISO of 3200 to deal with the low light indoor venue. 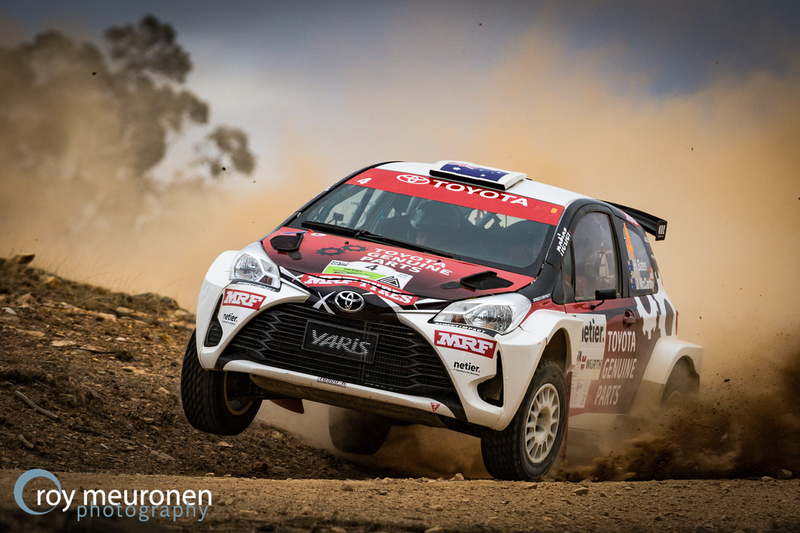 I have been involved with the National Capital Rally and before that Rally of Canberra for many years helping TV crews get in and out of stages to provide their fantastic video coverage. While performing this role got me access to a bunch of great spots, the photography always took a back seat to looking after my camera guy. 2018 was the first time in a long time that I was able to get out and just shoot photos. It was almost a bit daunting.

For the Hibernian stage in Kowen Forest on Saturday afternoon, I chose an easy to access media point on Millpost Road. When I arrived, I found that one of my fellow snappers had already set up a little further down the stage, so I figured I would go the opposite way and head up the hill. The stage map indicated a couple of bends and corners within a 1km walk. I first settled on the outside of a sweeping right left combination. However, when the zero car came through, it was a little disappointing. So I crossed to the other side to get a different angle on the first right hander. This was the second run through the stage and there were some tyre tracks up the bank on the inside, so I figured that I might see some good action on this pass. Not feeling entirely comfortable on the outside of the corner, I moved further down the hill and stood close to a very large tree with the long lens. This had the effect of getting a nice low angle on the cars coming through. When Harry Bates and John McCarthy barrelled through in their Toyota Yaris AP4 with two wheels in the air, I was very grateful that I had managed to grab a sharp sequence of images. Bates suffered some issues later in this stage, so I was lucky to grab this photo when I did.

I really like this photo. Wheels up, plenty of flying rocks and dust, and a nice clean background, with some sense of landscape. The cloudy conditions helped gain a nice even exposure, and the wind got rid of the dust real quick.

* The next two images are EQUAL favourite. *

One of the main reasons I re-invested in my camera gear a few years ago was that I was trying to get great photos of my two kid’s playing their sports. I was frustrated with the images I was getting. My old Canon 350D DSLR and even older Tamron 28-200 lens were unable to capture the fast paced action of football, futsal and baseball games. The focus accuracy and speed required to pick out a player on the field between all the other bodies just wasn’t there. The upgrade to a Canon 70D, and more so the Canon 70-200 F/4L zoom lens made all the difference. The quality of image I was able to achieve inspired me to try shooting different sports, and then reinvigorated my love of shooting rallies.

So the next two images are of my kids, Kai and Alicia, who are both striving to be the best they can be in their chosen sports. 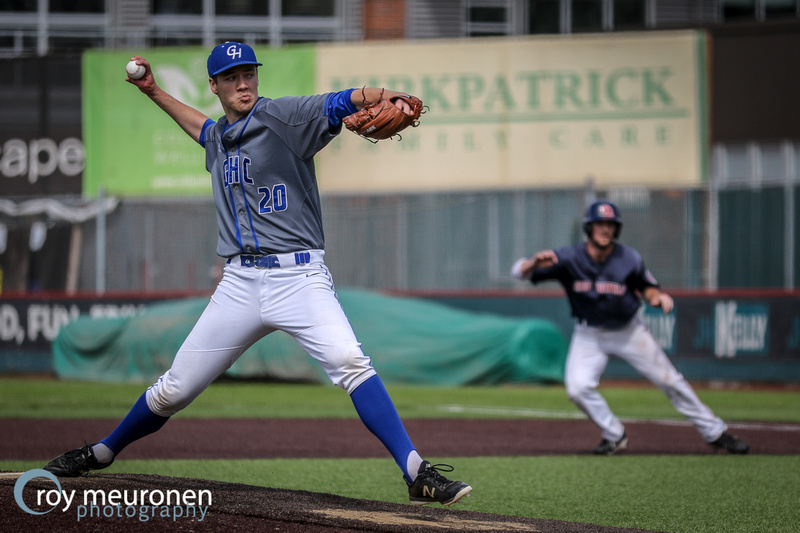 Kai is our eldest, and he has been playing baseball since T-Ball. He has gone on to represent the ACT at a number of school sports and national championships. His mum Deb pitched for the ACT in softball, so it is only natural I guess that Kai is a pitcher as well. You might think it would make more sense for a guy that stands at 202cm tall to follow his father into volleyball, but it turns out that being tall is a sought after asset in baseball as well.

Kai is now following his dream by playing college baseball in the US. He is studying at Grays Harbor College in Aberdeen, Washington (a 2hr drive SW from Seattle) and pitches for the GHC Chokers (I know) baseball team. In April we had the pleasure of seeing Kai in action during a short visit to the US. As a relieving pitcher, his outings were brief, but he performed really well, and I can guarantee you both his parents felt extremely proud to see him step up to the mound.

Pitching is funny in that there are only a couple of points in the pitching movement that don’t look weird in stills. This is one of my favourites with the leading foot just above the ground creating potential for action, and the ball grip and eyes clearly shown. The background is isolated, but with a bit of extra story interest with the runner leading off from first base. The 200mm lens (even on a cropped sensor body) is a little short for the baseball diamond, so this image will have been substantially cropped. 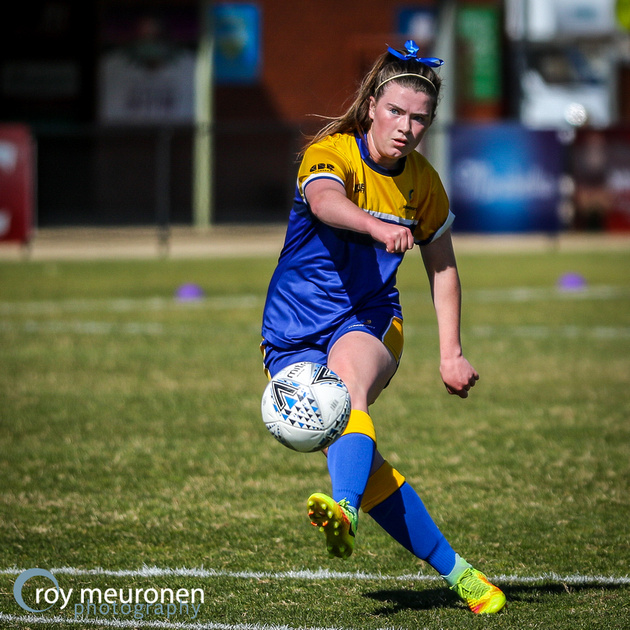 Alicia has been playing football since Peewees at the age of 4 or 5. With her natural talent and a killer left foot, Lefty (as she is better know in the football community) has also gone on to bigger and better things, playing 1st grade in the WNPL, coaching juniors, and representing the ACT several times at both football and futsal nationals. It turns out that she is also a capable volleyballer, so there is something in the genes after all. She was awarded Sportsperson of the Year at her recent graduation from Dickson College in recognition of both her sporting talents and her enthusiasm in getting other players involved.

This image was taken at the Australian School Sports Nationals in Shepparton, in what was probably Alicia’s last junior representative gig. I always look out for her through the viewfinder, not just because she is my daughter, but also because she invariably provides great action and athleticism. The concentration on her face as she takes this shot at goal shows how determined she is on the field. The body and ball position show great action that is nicely isolated from the background. Of course, that potent left foot is front and centre.

I’m really looking forward to getting out there again this year to try and capture and share more great moments of action. Follow me on Facebook or Instagram to keep track of where I have been.