This is pretty much the first photo I ever took with my own camera.

The subject was my school friend Owen who lived at number 27. I spent a lot of time at Owen's place. It was a huge house on a corner block. It was there when I first learned to appreciate cricket – both in the backyard and watching the tests on TV. The location of this photo is at the back door of the house I grew up in (number 71) – after the first lot of extensions, but before the wholesale remodelling of the back half of the house. The photo was probably taken around the summer of 1975/76, the school holidays before we started high school. 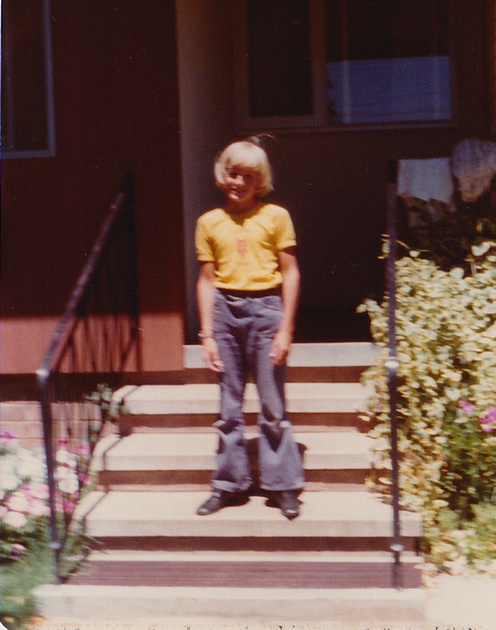 This photo is pretty crap. Sure, the exposure is okay (there were no exposure controls), and it’s probably in focus (fixed focus), but it’s hard to tell because of the camera shake. Rather than squeezing the shutter button, in all the excitement, I must have punched it.

Of course, I didn’t find out that I had butchered my first photo until the prints arrived back from the chemist – a wait that seemed endless at the time. The cost of film and the cost of D&P (developing and processing) meant that each photo was precious and to be carefully rationed.

The photo was taken with a Hanimex XP-1 110 format film camera that I bought with my own money from the Soul Pattinson Chemist at the Dickson Shops. I earned the money by mowing the lawn at our place and the house next door (which my parents owned at the time). I earned $10 per house (including nature strips). I remember for some reason fixating on the SP catalogue, and wanting that camera. Actually, I wanted the cheaper one, but for some reason, I was strongly urged to wait an extra couple of weeks (and mows) to pay the extra for the next best model. From memory it cost about $40. It had an add on flash attachment that used 4 shot flash cubes, and a cable release connection.

Fast forward to now, and number 27 is no more. It was bulldozed and "dual-occied" years ago. Mum and Dad are still at number 71 and the house is still the epicentre of our (now extended) family life. My parents sold the house next door long ago, but the tree that I used to mow around (and was able to jump over), now towers over the house and provides beautiful shade over the whole backyard in summer. I lost contact with Owen after high school and our paths haven't crossed since.

I'm still taking photos, but there is no sense of rationing as such. It's not unusual for me to fire off over 800 photos with my DSLR through one of my daughter's 40 minute Futsal games.

It is probably fair to say that I’ve gotten a little better at operating cameras since then, and thankfully with the advent of digital cameras, I can now see the photos I have just taken and perhaps have a second crack at a watershed image like this one that might be worth looking back at in 40 years time.