My Five Favourite Rally Photos of 2017

2017 has been a busy year for me shooting at a total of 11 rallies. From Whangarei NZ in the east to Rosewood in the west. From Coffs Harbour in the north to Lakes Entrance in the south. From scorching sunny days, to drenching rain. I’ve experienced some great action in a wonderful variety of locations.

Here are a few of my favourite photos from this year, and a little bit of the story behind them. 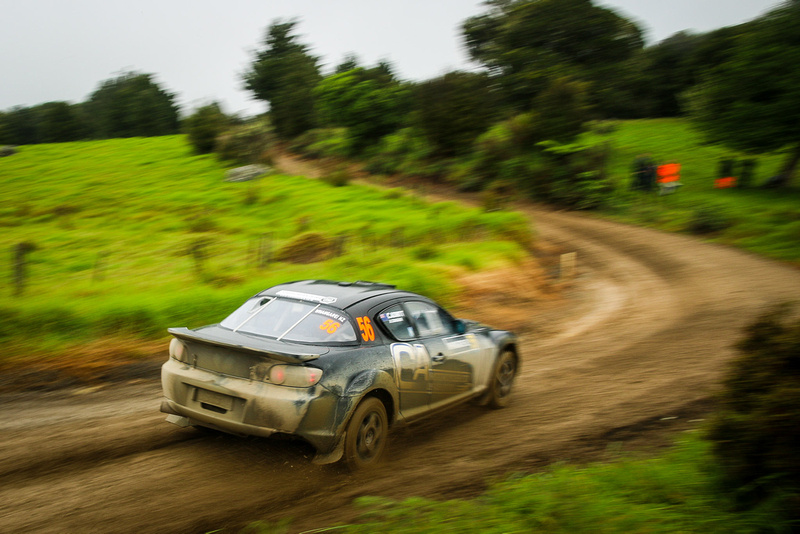 Sometimes you get lucky with timing. I was in Auckland to play Volleyball at the World Masters Games, and sure enough, the local Asia-Pacific Rally Championship round was on at the same time (and on the same island). So I was able to make a day trip up north to catch some rally action. It was obvious that the Kiwis really love their rallying – judging by the large numbers that still came out, despite the very wet and windy weather. It was an opportunity to work on my hands-free umbrella system while capturing some images in some very different, and very green landscapes.

I like this shot as it captures my memories of that event. Wet and muddy and green. An unusual rearward angle from the outside of the corner with a wide lens gave a sense of the conditions, the countryside, and the route to come for the driver. It’s not only the top guys that give you nice photos. I like to hang around to the end of the field – there is often just as much passion and commitment with the slower guys. 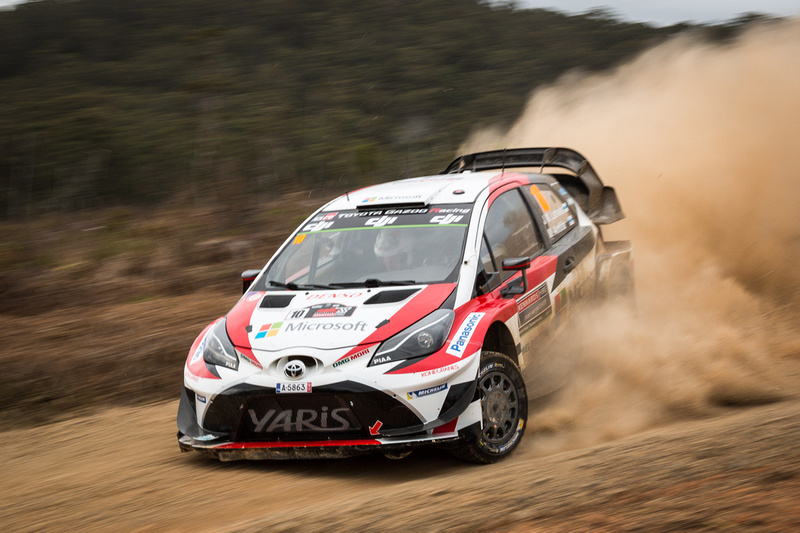 This was only my second visit to Rally Australia. I travelled up to Coffs Harbour with my friend and fellow photographer Glen (Holdfast Photography). The biggest challenge of this event is shooting as a spectator. Being limited to official spectator locations is frustrating, but it can be done. Basically, you need to get there early, select the best position, and defend it diligently. Highlight for me of this rally is the sheer speed of the WRC guys – incredible, and difficult to keep up with. Lowlight was standing in heavy rain for 20 minutes on Sunday morning with no umbrella and two cameras to keep dry.

This shot of Finn Jari-Matti Latvala was one of the first few frames I shot at the rally. I was able to get close to the road on the inside of a fast left-hand bend, with a nice clean background. Shooting wide with a relatively slow shutter speed panning along with the car as it went past gives a sensation of speed. A nice bit of attitude and a locked front wheel adds a little bit of extra sauce to the shot. 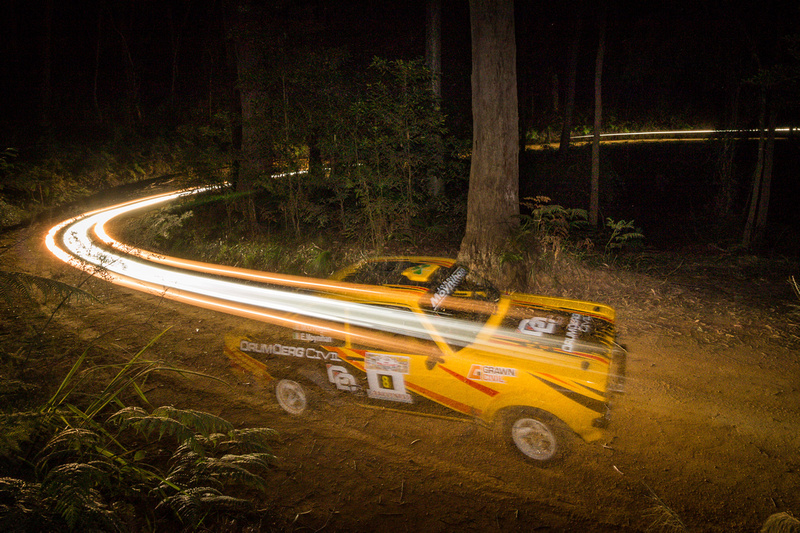 Around a two hour drive from home, this rally can just be done as a day trip. Thanks to some great tips from the event director Ian Bigg, we were able to choose from some great locations to shoot. There were lots of other snappers at this event. On the first stage, there were probably 9 or 10 photographers on the same corner. I was determined to get something different to the rest of the guys. Come the night stage, I found a location on Clyde River Road that sparked an idea.

For this shot, I mounted the camera with a wide lens on a tripod, high on a bank outside the bend in the road. The flash was mounted on the camera, and I had a cable remote to control the shutter. Using the bulb setting, I opened the shutter as the car approached, and then closed it again as the car came past in front of me. The flash was set to trigger as the shutter closed, giving the frozen image of the car dragging a trail of light behind.  I tried quite a few combinations of settings to get the balance right between the car lights and the flash. I think there is still plenty of room for improvement. 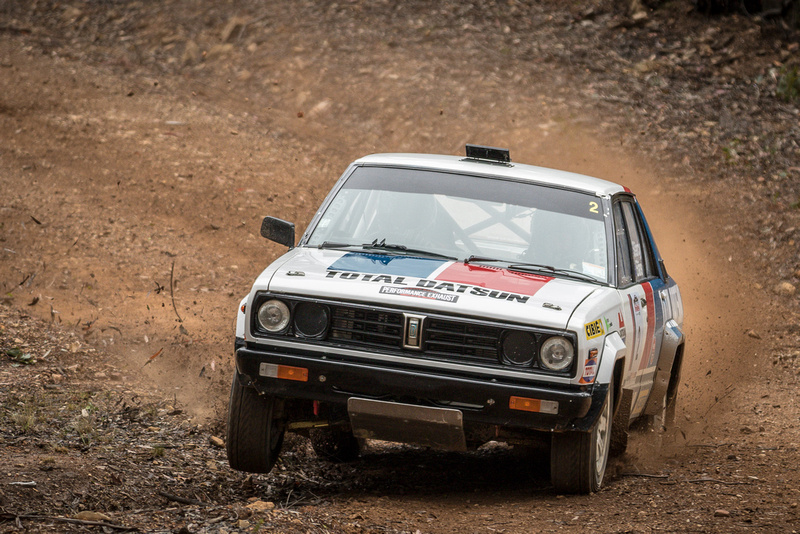 This rally only runs every two years, and with a huge field of classic 2WD vehicles, it was a must do on my calendar. Too late to get a formal photographer accreditation for the event, I was able to land a gig as a camera assistant with the Black Magic Media TV crew. This way, I was able to help out the event, get good access to the stages, and grab some photos too.

Overshadowing the whole weekend was an approaching storm system that was making it’s way across Victoria. Some doubted that the event would even go ahead, but the organisers did a terrific job of contingency planning that ensured that there would be at least some action in the forest. Challenges for this event included shooting a field of 125 cars at a pretty ordinary location on Friday’s SS1 (keep trying different angles – for 4 hours!); and spending a very wet Saturday in the forest and mud feeding the leeches (it got to the stage that my umbrella needed an umbrella).

This photo is of Simon Evans in his Stanza on one of the much drier Sunday stages. You could almost see the smile through his helmet as he threw this beast sideways through the forest. Shot with a long lens from an almost head-on position, standing outside the exit of the corner (behind a very large gum tree). A fast shutter speed freezes the action as he lifts his wheel over the gutter on the inside. The flying rocks and sticks add to the spectacle. 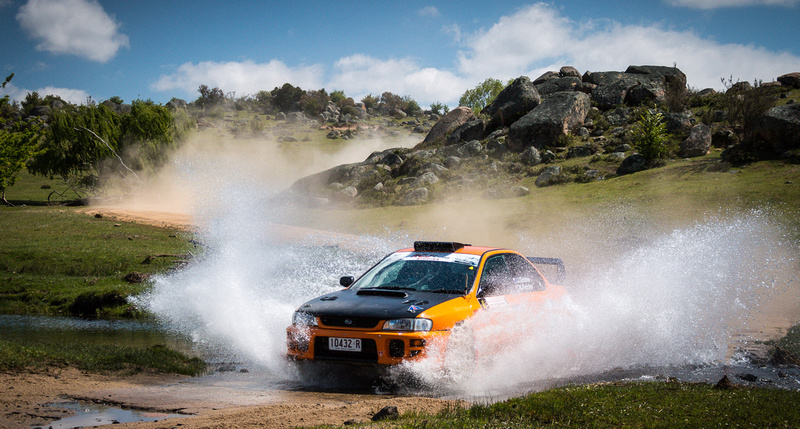 This was my very favourite location for the year. Thanks to the organising team I was able to shoot at this water crossing on the first stage. A beautiful scenic spot with a great background of granite boulders and blue sky. The sweeping bend on the approach leads the eye into the photo, and who doesn’t love a water-splash?

I covered this spot with two cameras. I shot the approaching corner with my 7D and a long lens, while I covered the water crossing with my 70D and a wide lens remotely operated and fixed on a tripod. I used a polarising filter to add contrast and bring out the colours of the background. It was a bit of a juggle shooting one camera, then hitting the remote radio trigger for the second, but I was very happy with the results.

However, shooting the photo was just the first part. Unfortunately, there were a few things cluttering the out-of-camera image. Worst were the fluorescent orange bollards staked on each side of the crossing, then the caution sign on the approach, and then the profile of the local landowner watching from above the rocks in the background. All of these were a distraction to the image, so a fair bit of time was spent in Photoshop removing these items (content-aware fill is your friend). I think the clean, natural look of the resulting images was worth the extra work. This location was probably my best-selling spot for the year.

Looking forward to another busy year shooting more rallies in 2018!